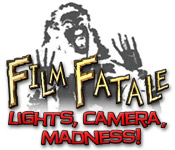 Film Fatale is a Fugazo recent release Hidden Object game that is reminiscent of the early film industry. Understandably, as the aim of the game is to rescue your mother, screen siren Rita Ray, from the clutches of deranged director M.W. Vernon.

At the height of his career, and his brilliance, Vernon built an island studio which drifted into obscurity with his spiral into madness. The film he was going to make there was supposed to be the best ever made, but it was never finished. Now Rita Ray is missing and her daughter Helena has been brought to the island to search for her.

The game is played as Helena, searching Vernon’s island for clues to Rita Ray’s whereabouts.

The graphics are not spectacular but they are reminiscent of the era being portrayed. The hidden object scenes are hinted at by a glimmer of light that is much more subtle than the swirly fog in a lot of HOG. They are not the most challenging that I have played but they aren’t the easiest either. Everything about this game is atmospheric, the soundtrack, the voice overs and the graphics transport you to the 50’s movie studio and the hidden object scenes could be cast aside storage boxes on a movie set.

The thing that really annoys me about HOG is that you are forever backtracking, retracing your steps to find the projector you needed film for, the door you needed a lock for  etc.  I would much rather pick something up that I may need later and end up with items I didn’t use than go searching for an item I discovered a use for and have to go back to use it. The folks at Fugazo must have heard my curses because Film Fatale has a fabulous item you can pick up which allows you to jump to areas of the map so after you pick it up you can open your map, see where you need to go and one click and you’re there – I LOVE IT!

To help you keep track of your progress there is a journal that records all the important clues and the map which tells you where you are, and where you need to go next.

Part spooky suspense, part spoof this is an amusing and entertaining afternoons work. The in-game timer said that it took me a little over 2 hours to complete so it’s not really a very long game. It’s not for the serious, experienced Hidden Object aficionado – the lack of challenge and short completion time could leave them unsatisfied. But for those a little greener this fun little horror film related HOG is a fantastic way to spend an afternoon.

Explore an entire island studio and test your observation skills at mini games and hidden object scenes and see if you can outsmart the director before you become an extra in the climactic, disastrous final scene.

These days people are more excited than ever to explore and experiment with hair colour. Some say hair colouring can make you feel in charge of your life and reflect…

We have 4 book bundles up for grabs! Each set contains 3 bestselling titles from one of our favourite authors, Jennie Jones. The lucky winners will receive: The House on…