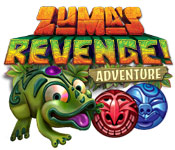 PopCap Games is a world leader in casual gaming, and I can see why. Zuma’s Revenge is a Match-3 game that has me hooked. I go to play one level just so that I have it all fresh in my head when I come to talk about it and next thing you know hours have passed and I completely forgot what I was supposed to be doing.

Zuma’s Revenge is a shoot-em-up Match-3 game that has a freaky looking frog shooting balls to break the chain and please the Tiki Gods. There are 4 different modes of play, though two of them can’t be played until they are unlocked by completing Adventure mode.

The soundtrack is not something that really does it for me, which isn’t really an issue because it’s easy to switch the music off, or just your speakers.

There are 6 islands to work through, stopping the balls getting sucked into the skull at the end of the wire. There are times the balls seem to be neverending and once the skull gets them you lose a life. Fortunately there are checkpoints every 5 levels that allow you to restart your game from if you lose all your lives, which is something I am going to love because the idea of having to start from scratch every time gives me the shivers.

Capture powerups and bonuses of all types by destroying the ball they’ve been attached to and you can change the direction of the balls, remove all of that colour from the gameboard, pick up an accuracy aimer and a laser to destroy single balls. All of which make clearing the board a great deal simpler.

The important trick to get the hang of is to destroy a string of balls and shoot through the gap you created to captures the bonus fruit or, more importantly the further you get, destroy chains further back along the wire.

Game play is fluid as it grows more complex and the balls roll much quicker the further you get but it never loses it’s appeal.

PopCap games has also developed new level layouts  for Zuma’s Revenge which have your frog hopping between two lily pads or rolling on a horizontal track at the bottom or screen as opposed to always sitting in the middle spinning in a circle.

Challenge mode gives you 3 minutes to collect as many points as you can, shooting as many strings of balls as possible. To advance through this mode it’s about beating the challenge score and unlocking new challenge levels.

For fast paced fun in bright colours with a freaky frog and Tiki gods to defeat this is a great way to spend some downtime.

For your FREE 60-min trial head over to: Zuma’s Revenge – Adventure

These days people are more excited than ever to explore and experiment with hair colour. Some say hair colouring can make you feel in charge of your life and reflect…

We have 4 book bundles up for grabs! Each set contains 3 bestselling titles from one of our favourite authors, Jennie Jones. The lucky winners will receive: The House on…