Sabaa Tahir captivated thousands worldwide with her debut An Ember In The Ashes in 2015, and was the runner up in the ‘Best Debut Goodreads Author 2015’ category of the Goodreads Choice Awards. We reviewed the book as a book club title when it released and I loved it, it was a very popular book club leaving some very excited readers awaiting the sequel which is finally being released this month.

The book arrived on my desk and I knew that I had to read it, and soon. Of late my reading has slowed, mainly because there is a lot going on around me which is cutting into my reading time. Not this time, I knew I had to MAKE time to read this one.

A Torch Against The Night picks up exactly where An Ember In The Ashes finishes, I was a little concerned that with 12 months and who knows how many books in between it would take a little bit of time to immerse myself back in the story and the world that Tahir built in An Ember In The Ashes. I had nothing to worry about, by the end of the first chapter I was right back at Blackcliff Academy with Elias, Laia and Helene.

I find it very difficult to review a sequel without spoilers of the first book, though not so much the actual book I’m reviewing. So please be aware if you haven’t read An Ember In The Ashes there may be some spoilers.

A Torch Against The Night follows Elias and Laia on their quest across the Empire to liberate Laia’s brother from the most infamous prison in the land.

The storytelling is crisp and original, completely captivating and still quite gruesome and graphic. A Torch Against The Night is quite brutal, like it’s predecessor, there is no shortage of carnage, fight scenes and blood.

The Empire is in turmoil, the new Emperor has yet to gain the faith and loyalty of the Gens families and his Blood Shrike finds her skin crawling just being near him.

Helene Aquilla finds her loyalty in question and is sent on a mission to prove herself, a mission even she is not sure she can accomplish.

Elias has become the most hunted and most wanted traitorous fugitive in the Empire but his training as a Mask will ensure he is well placed to avoid detection.

The narrative is written from three perspectives: Laia, Elias and Helene. All characters we know intimately from An Ember In The Ashes.

We need all three perspectives so that we can keep abreast of happenings across the Empire, because with first person narratives it’s hard to know what’s going on outside the range of your narrators. 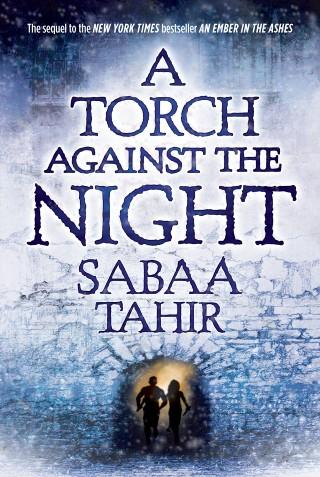 It seems there is a lot more to all we learned in Tahir’s engrossing debut and many of those questions are answered in A Torch Against The Night, though there are still many left to be answered in the final story of the trilogy…. which I am already eagerly anticipating and wishing it was here.

Over the last few years I have managed to lose trilogies along the way, mainly because there is so much going on in my reading life that they pass me by. I loved The Passage and Red Rising, I have the second book in each of those trilogies and am hoping to collect the final installments also but have yet to read the second books because they slid in under my radar. I refuse to let this happen this time, and I certainly won’t be missing the third book.

The pacing is perfect, with non-stop action and some exciting twists that I didn’t see coming. The body count is astronomically high and it’s enough to set many of the most loyal minds to questioning.

The story is cohesive and the world-building solid. This is a book that held me hostage start to finish and I can’t wait to find out what comes next.

I also look forward to hearing what our book club readers have to say.

Thanks to HarperCollins 10 of our lucky Beauty and Lace Club members are going to be reading A Torch Against The Night as well so please be aware there may be spoilers in the comments below.

A Torch Against The Night is available now through HarperCollins, Angus and Robertson Bookworld. Booktopia and where good books are sold.