Today we have an interview with author Holly Ford about her latest release The Last McAdam, a book we are reading for book club and that I really need to sit down and review. The last couple of weeks have been pretty hectic with my new arrival so though I got the reading done, I haven’t got the writing bit yet.

So while we wait for me to find a quiet hour to get some words down why don’t you sit back and get to know Holly a little better.

Hi Holly, welcome to Beauty and Lace and thanks for taking the time to talk to us.

When did you know you wanted to be a writer?

I was the baby of my family, and by the time I was old enough to remember, my brother and sister both had writing careers, so it was kind of in the air that I breathed. I’ve almost always worked with words in one way or another, writing radio and television advertising, presenter scripts, movie trailers and magazine features. I started writing my first novel when I was 21. I finally finished it eight years later, mostly just to say I had. But I didn’t really get serious about writing fiction until I was in my early thirties. I guess you could say that in an indirect and deeply minor way it was a consequence of 9/11 – I was living in London at the time, and in the transport chaos that followed the attacks I started walking the six-odd kilometres from our flat near Tower Bridge to my work in Oxford Circus. It turned out to be a lot more pleasant than the Tube, so I kept doing it, and while I walked bits of story began to arrive in my head in a way they never had before. When I sat down and started working on them, suddenly everything else I’d done in my professional life began to seem a bit dull.

Can you tell us a little about your latest release The Last McAdam?

It’s about a strong, sensible, level-headed woman called Tess who in a moment of weakness at her ex-boyfriend’s wedding hooks up with a stranger she mistakes for a friend of the bride, only to discover when she turns up at her next job that she’s his new boss. And it really only gets worse for poor Tess from there.
The company she works for has just bought failing sheep and cattle station Broken Creek at mortgagee auction, and Tess has been sent in to do a hatchet job on the place – her first task is to get rid of almost everyone who works there. But Nate McAdam, the guy Tess had never expected (or wanted) to see again, turns out to be the fourth-generation son of the family who have just lost the farm, and he and his team have no intention of leaving without a fight.

What inspired the story?

I wish I could tell you! It’s one of those stories that just turned up fully formed – all I had to do was try to keep up with it. I guess maybe it started with the character of Nate McAdam, this outrageously charming, outrageously gorgeous maverick of a man who can do pretty much anything on the station except the accounts.

Can you tell us a little about global agribusiness companies and what they do?

Agribusiness is a term that covers all stages in the food and fibre supply chains – meat, dairy, horticulture, seed crops, fodder, wool, cotton, rubber and more – so it’s pretty broad. Every productive farm is an agribusiness. So are global giants like Monsanto and Dow AgroSciences. Somewhere in the middle are companies like New Zealand’s dairy co-op Fonterra, which collects milk from farm gates in New Zealand, Australia and Chile, owns farms in China, and has processing plants in Asia, the Middle East and North and South America. A very different example is Grasslands LLC, a US-led company which matches investor capital to low-risk land investments around the world and currently manages ranches in Montana, South Dakota and Florida as well as a high country station in New Zealand.

Carnarvon Global, the fictional agribusiness player that takes over Broken Creek in The Last McAdam, is a private company founded in Australia which has interests in transport and logistics as well as a variety of farms across Australasia, Canada, South America and South East Asia – right about now I’d say it’s looking at expanding into India and China.

How much research did you need to do and how do you go about your research?

I don’t think a writing day ever goes by without me finding something to look up! I do most of my day-to-day research online, and I also read non-fiction books on relevant topics, but nothing beats going to places and talking to people. I have people who advise me (not all of them knowingly) on all kinds of technical things. One of the things I love about writing a novel is that you never know what you’re going to end up knowing by the end of it!

Do you plot or allow your characters to guide the story?

I plot a little in my head, but very rarely on paper. I like to give the story and the characters room to breathe and grow as they go along.

Is there anything new you’re working on that you can tell us about?

I’m working on a new romance at the moment – I can’t tell you too much, but I think it’s safe to say that we haven’t seen the last of Nate and Tess and Broken Creek Station.

Do you have a social media presence where your readers can find you? And how important do you think self-promotion is to your career?

I have a website, www.hollyford.net, and I’m also on Instagram. I think the best promotion for a book will always be word of mouth – people who read it, love it, and tell their friends. But it’s nice to have places to connect with readers, somewhere people can get in touch and maybe find out a little bit about what’s going on behind the scenes.

Who do you love to read?

What is on your TBR pile right now?

My Brilliant Friend by Elena Ferrante (to be followed rapidly by the rest of the series, no doubt) and Rescue Pilot by John Funnell.

Thanks for talking to us and good luck with the release of the book. 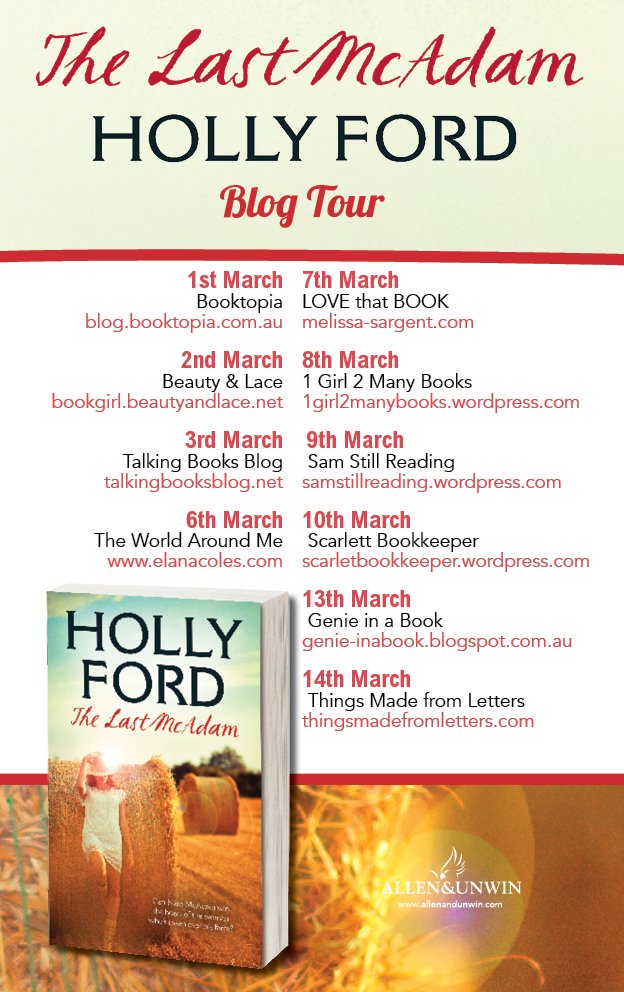 You can purchase your copy at Angus & Robertson Bookworld, Booktopia, iBooks, Amazon and where all good books are sold.