Helene Young is an Australian author I have admired, apparently from afar, since first reading her work in 2012. I have managed to miss all of her books since then but they remain firmly ensconced on my wish-list.

Return to Roseglen seems to be, if I can trust my very sketchy memory, quite different from the tense romantic suspense she has written previously. That’s not to say that …. actually I could be completely wrong because the more I think about it there are strong elements of suspense, secrets long buried and romantic tension awaiting a conclusion. Perhaps I was thinking it was very different because this is an extremely family oriented suspense and the main relationships being explored are familial, and the way that then relates to relationships outside of the family.

I have read quite a few books recently that relate to the passing of the family matriarch and the subsequent inheritances of the children, and it’s never pretty. Family is such an important element in all of our lives and when someone passes it should be a time that we come together to remember, to be thankful for the time we had and to cement our bonds through our grief but too often it becomes a battleground with lines drawn in the sand because some people are more worried about what they deserve and what they get than the connection and the history they’ve just lost.

Ivy Dunmore is a formidable matriarch who has been managing the family property for decades but time is no longer on her side and she is becoming frail, which is to be expected when you’re 93. I must say that my admiration for her ran deep because that’s an age I can’t really fathom, and to still be at home on your own and managing a cattle station. She has been slowing down since a quad bike accident three years ago but still managing.

The story is told in alternating chapters by Ivy and her two daughters, Felicity and Georgina. We get three unique perspectives and a slowly evolving puzzle of family relationships, betrayal, deceit and ambition.

Felicity is approaching her 50th birthday, working tons of overtime and dealing with a crisis in her own life. She has always been the easy-going, conflict-avoiding baby of the family. She has just discovered her husband in the most compromising of positions and faces a complete change of life as a marriage of almost 30 years is dissolved. A lot to deal with on top of an ailing mother who needs increasingly more attention as she is adamant that she doesn’t want to leave the family property though it’s clear that she can’t live on her own. Felicity, better known as Lissie, has always been quite close to her mother. She has oodles of empathy which makes her an amazing nurse, a career she has done beautifully with; even if she would have preferred to stay on the property if she was completely honest with herself.

Georgina is on the far side of sixty and flying aid missions but the company have decided to stop flying into Syria and Georgie is left with the dilemma of what to do next. She is a strong and fearless woman whose ambition saw her becoming a pilot when it was still a largely male dominated profession. The thought of returning home is double edged, her relationship with Ivy has always been quite fraught and Georgie has never really understood why. A trip home may be just what’s needed to try and make some amends while there is still time.

Ivy was a character that I absolutely adored, though she broke my heart. 93 years old and beginning to lose her independence, this is a massive blow for the woman who ruled the CWA for something like half a century, was community minded and always willing to help out where it was needed.  She has always been forthright, formidable and brutally honest but now she seems to be forgetting things an awful lot and just misses her dear husband, she is ready to be with him again but first there are skeletons in the family closet she hopes to air before it’s too late. 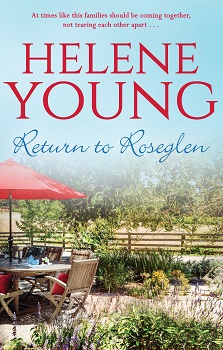 Return to Roseglen is a story filled with strong women, and the family are finally realising that Lissie may just have more backbone than they ever gave her credit for. I am inclined to think that maybe it was always there inside of her but it took something big for her to need to put it to use. Ella is Felicity’s daughter, also a pilot, and a strong willed young woman who has inherited the best of all the Dunmore women.

All of these women are deeply connected to the family station, some weren’t quite aware of the depth of that connection. Unfortunately the way family succession often goes in farming, and business, is that the first son inherits the bulk. Ken Dunmore is, well I actually have quite a few things I’d like to say about Ken Dunmore but they wouldn’t be very nice. Ken is the eldest of the Dunmore offspring, and he has stayed close; with a cattle station bordering Roseglen.

Drought is wreaking havoc in North Queensland and keeping the station is looking less certain, but the biggest threat isn’t necessarily from the weather. Can Lissie and Georgie help Ivy sort out the threats before it’s too late?

Sibling rivalry can be a bitter battle and the lines have always been drawn between Ken and Georgie, Lissie on the other hand always removed herself from the conflict. Ken has more than just a chip on his shoulder and he is a character I found despicable. Smarmy and charming in public but a nasty, entitled manipulator where he thinks no-one can see. I spent the whole book hoping he would get caught out and taken to task.

Helene Young has explored some very topical issues in a way that was emotional, sensitive and intuitive. I fell in love with all of the strong Dunmore women she has created and the men that truly knew how to love them.

Ivy was a formidable woman with a huge heart and a lot of love, that she often didn’t know how to show. It was interesting to see how her daughters looked back on their childhoods from the new perspective of middle age and saw their mother in a very different light, it can’t change the past or take away the years of hurt but it can certainly allow a little understanding.

I still have so much to say and I’m just not sure how to do it without throwing spoilers in so I will leave it at a captivating exploration of family, abuse, succession and the far-reaching consequences of secrets that need to be kept. I actually spent quite a large chunk of tonight’s reading time with a wetness hovering in my eyes at the beauty, the heartbreak and the power of forgiveness and moving forward.

Young explores new beginnings and massive directional changes still open to you in middle age and that it’s never to late to chase your happiness and follow your dreams. An amazing read that explored so many aspects of life on the land, life in the years following the second world war and the power of sibling solidarity. A book that I would unreservedly recommend.

Return to Roseglen is book #31 for the Australian Women Writer’s Challenge 2018.

Return to Roseglen is published by Penguin RandomHouse and available now from Angus & Robertson Bookworld, Booktopia and where all good books are sold.

Thanks to Penguin RandomHouse 10 of our Beauty and Lace Club Members will be reading Return to Roseglen so please be aware there may be spoilers in the comments below.

The 2022 Product of the Year Award winners have been announced, and it’s time to celebrate. This is the largest consumer-voted awards program, that showcases the most innovative products on…

We have ten gorgeous special 10th anniversary edition hardcover books to give away. “And in this quiet moment as I close my eyes, spent and sated, I think I’m in the…